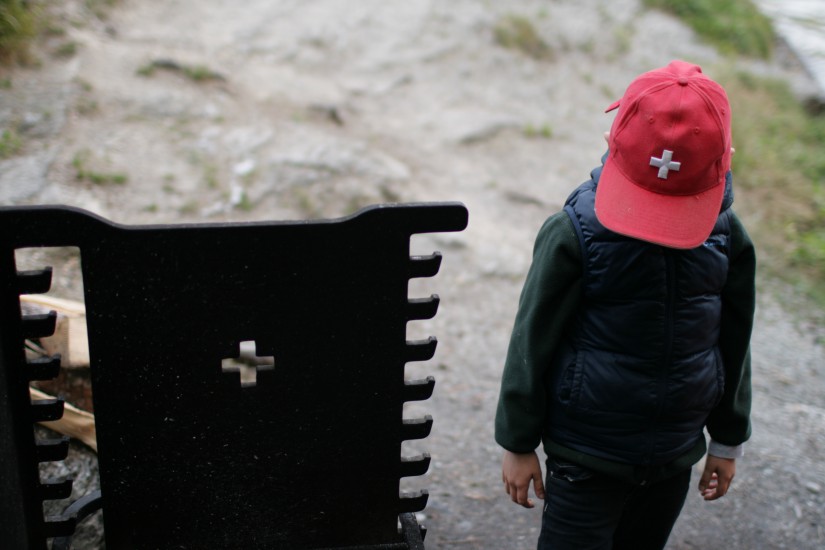 Federico Luger, Swiss Alps, the End of the Illusion (2013). C-print on aluminium. Edition of 3.

The title of the show (my house is your house) alludes both to the fact that it will take place at Secondo Pensiero, a space which is in fact a B&B, thus a temporary house to its guests, and also because one of the series, The Swiss Alps, has been inspired by Luger’s second home in Switzerland.

The exhibition will present different series of works: The Swiss Alps, the End of the Illusion (2013) the aforementioned set of photographs that addresses the end of bank secrecy in the country; small paintings from the series Bananas, a selection of two massive paintings which deal with the human figure, more specifically with portraiture; the Line Concept collages, two works from the Monochrome series and the almost complete Venice Book series. This last set of works on paper will be installed in one of the rooms, so it will only be visible during the opening evening.

Federico Luger is a Venezuelan artist and gallerist. After several years spent travelling around Europe, he opened an art space in Milan, which then turned into Federico Luger Gallery. In the twelve years during which the gallery has been operating, Luger has produced more than fifty exhibitions. However Luger never stopped his artistic practice, which he preferred to conduct in secrecy, reflecting on conceptual art, perception of art, and the art system in general. Both his activities, artist and gallerist have enriched each other. This exhibition and Luger’s oeuvre deeply reflect on the complexity of the twofold nature of his passion.

The exhibition will be open from September 18th thought October 18th, on Tuesday and Wednesday from 3 to 7pm, or by appointment.

To make an appointment, or to request images and further information please contact Gabriela Galati at info@ec-centric.eu.