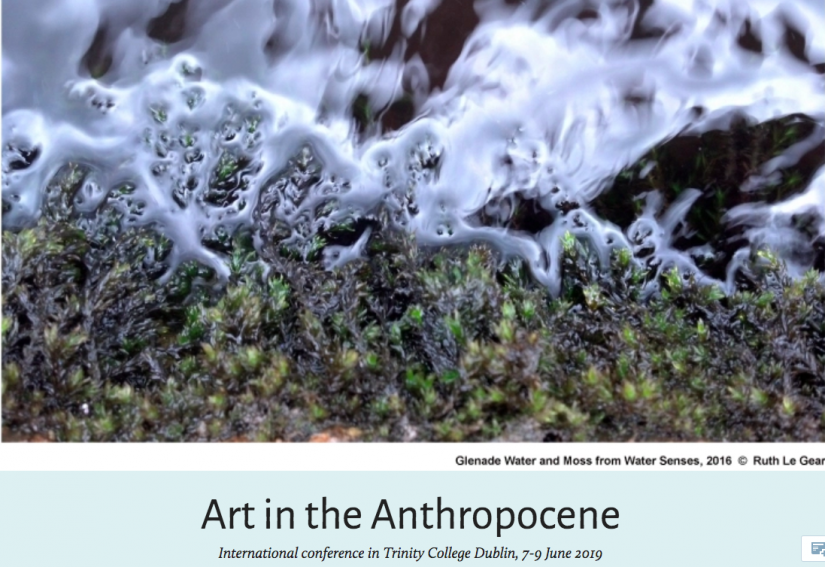 The School for Creative Arts and the “Identities in Transformation” Steering Group invite you to participate in the conference “Art in the Anthropocene” at Trinity College Dublin from Friday 7 June to Sunday 9 June 2019. The conference is being organised in collaboration with the Trinity Centre for Environmental Humanities, and the Science Gallery’s exhibition on PLASTIC.

The Anthropocene has been defined as the present geological epoch in which the earth’s ecosystems and biodiversity are being slowly disrupted by human intervention. The term has become commonly used since the beginning of the twenty-first century when Paul Crutzen argued its importance in a Nature article, and since then scientists have debated its credibility and possible starting point, suggesting the end of the eighteenth century (with the birth of the industrial revolution) or 1945 (with the commencement of nuclear weapons testing).

The notion of the Anthropocene raises important questions that concern the sustainability of the planet.  With seas rising and becoming inexorably acidified and contaminated and the destruction of coral reefs (such as the Great Barrier Reef); with fish life and plankton dying because of climate change and pollution from plastic, oil, and other forms of human waste; with the endangerment and extinction of animal species; with huge tracts of land in Africa being leased by China to feed its own population; with African governments encouraging their citizens to go abroad in order to send back foreign income to sustain their national economies; with aggressive mining  and fracking operations, fertilization, forest fires, and over-cultivation of land; with the ubiquitous burning of fossil fuels and the increase in carbon dioxide in the atmosphere; with deforestation, drought, desertification, poverty and hunger in the global south forcing increasing waves of migration; with melting icebergs,  periodic oil disasters, and emissions of radiation from nuclear power plants as well as the continual threat of nuclear war; and with the rapid increase of the world population to 7 billion (estimated to increase to 10 billion by 2050), Elon Musk has offered a wake-up call by proposing that we need to colonize Mars.

Posthumanism has offered an alternative to anthropocentrism and emphasised the importance of the non-human in the challenge against the destructive effects of the Anthropocene. Posthumanism privileges animals, plant life, ecological systems and the environment, as well as providing a feminist perspective on human patriarchy. It emphasizes the protection and conservation of the earth and its inhabitants, recognizing continuity between all living creatures including plants, animals and humans. New trends in philosophy offer new materialism, object-oriented ontologies, and theories of social assemblage.

The final progamme of the conference can be found here. And here it is possible to download the book of abstracts and participants’ bios.